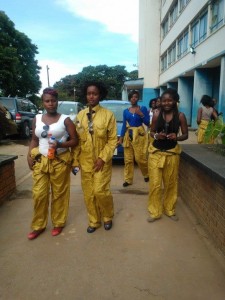 The Lusaka Times reports the shocking case of the arrest of 42 youths for wearing a t-shirt with a political message. The 42 young people were arrested for simply wearing t-shirts with a slogan demanding a new constitution for Zambia.

The youths were taking part in a Youth Day March. ActionAid Executive Director, Pamela Chisanga expressed shock that Police could detain people for simply wearing tshirts with a slogan demanding a new constitution for Zambia.

Since the arrests, there has been widespread condemnation of the action in Zambia on the basis that it violated human rights and freedom of expression of the 42 tshirt protestors.